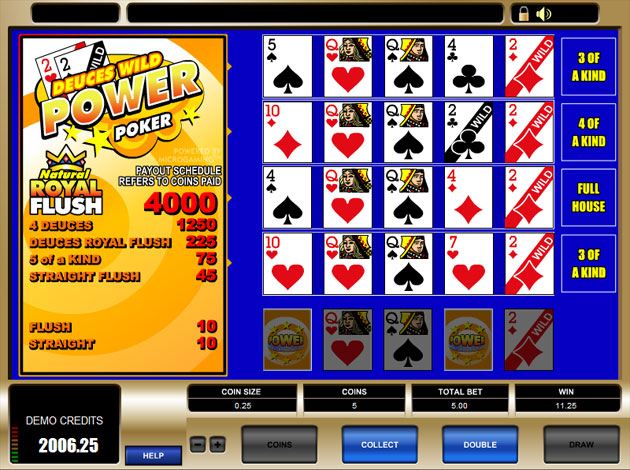 Microgaming was one of the first online casino games developers to start paying serious attention to video poker titles, and as a result have made loyal fans of many casino enthusiasts who enjoy this single-player version of the classic card pursuit. Deuces Wild Power Poker is one of the software brand’s popular video poker titles.

Like other Deuces Wild games, Microgaming’s Deuces Wild Power Poker plays on a 52-card deck with no Jokers. As the name indicates, however, the Deuces are Wild; and this means truly Wild. Some variations of video poker designate a card as semi-Wild, allowing it only to substitute for other cards only in certain combos; to complete four of a kind, a flush or a straight, for example. In Deuces Wild Power Poker, the Deuces can substitute for any other cards in any winning combo appearing on the pay table.

Play up to 100 Hands Simultaneously

The other feature of Deuces Wild Power Poker that attracts hard-core video poker aficionados is the availability of multi-hand play. Players can play up to 100 hands per deal, for an appropriately increased wager.

The player can also vary the number of coins bet per hand in Deuces Wild Power Poker. Many River belle casino players find it advisable to play as many hands per deal as possible, even if budget constraints force them to play at lower stakes per hand. This is because of the strong variance in the pay table; playing 100 hands at a time gives the player the chance to score one or two of the top-paying combos more regularly than they can when playing fewer hands at higher stakes.

Depending on the number of hands the player has selected, Deuces Wild Power Poker will deal the player up to 100 five-card hands at once. However, the hand at the bottom of the playing area is the only one the player has to worry about. All the other hands will be automatic duplicates of this hand at the end of the deal.

The player then chooses which cards to hold, and of course the held cards are also duplicated across all the hands in play. On the draw, the game replaces the discards with cards drawn from those remaining in a 52-card pack, with the RNG software selecting random cards from the same pool of 47 cards on each hand. Each of the hands in play is then assessed according to the pay table, and the player is paid out for all winning hands.

Unlike many video poker variants, Microgaming’s Deuces Wild Power Poker does not pay prizes for Pairs or Two Pairs. The qualifying poker combination is Three of a Kind, for which the player wins 5X the bet per hand, referred to as 5 coins for convenience. Deuces can substitute for other cards to turn a Pair into Three of a Kind, of course. Deuces can also substitute in a Straight or Flush, each of which pays 10 coins, a Full House for 15 coins, Four of a Kind for 20 coins, or a Straight Flush for 45 coins.