Have a Look at the Review of Dino Might Online Slot 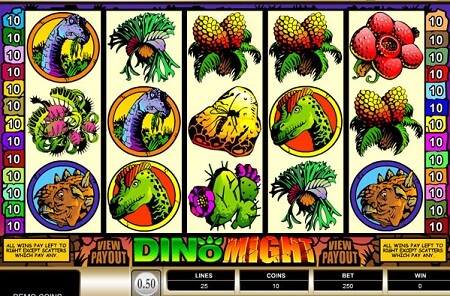 Dino Might is an online slot machine game, based around a prehistoric animals theme. It uses a five reel, thirty payout line system, and allows players to adjust play lines and the betting amount as they prefer. There is a scatter symbol that will grant a number of free spins, as well as a wild symbol, which may match with any other symbols as a substitute.

The game is outstanding in that it uses high quality hand drawn images, each portraying a dinosaur in impressive comic-style detail. The game is available on desktop computer, tablet and mobile phone. Note that the game is optimised for play on home computer, not requiring any permanent download, but is also playable on mobile devices. The graphics of the game specifically, being bold and easy to identify even on small screens, allows for a good game experience even on phones with small screens.

In order to play the game, first decide on a betting amount, and the number of lines on which you would like to play. This can be adjusted via the interface found at the bottom of the screen. Note that the higher the betting amount, the more will be won for each matching sequence achieved.

Also note that betting lines may be reduced, which will save on the initial betting amount required, but that lower bet lines mean there is a reduced chance of a sequence being matched. It is best to raise and lower these options as the game progresses, in order to find a balance between cost and winnings. Once the betting amount is decided, the spin button may then be clicked, which can be found in the lower left of the screen. The reels will be put into motion and eventually come to a stop. All winning sequences will be marked and appropriate payouts made. The bet and betting lines may then again be adjusted, and another spin taken.

Each symbol, represented by a dinosaur or prehistoric plant, has a certain value that will be paid out upon the symbols being matched. The most valuable symbol in the game is the tyrannosaurus rex, which will give a good payout if matched with itself the maximum of five times. The least valuable symbols in the game are the plants, which will give low payouts, even if matching the maximum of five times. The real money, however, is found in the game’s bonus symbols and special feature mini-games.

The Dino Might logo is the game’s wild symbol, which will match with other symbols to create matching sequences. And, if matched five times, the Dino Might symbol will grant a massive once off payout. The mosquito in amber symbol is a scatter symbol, and if matching on reels three, four and five will trigger a bonus mini-game. In this mini-game the player is given a number of free spins, which will begin to play out automatically. If the mighty multiplier is landed during the free spins, each win achieved will payout up to five times the normal amount.