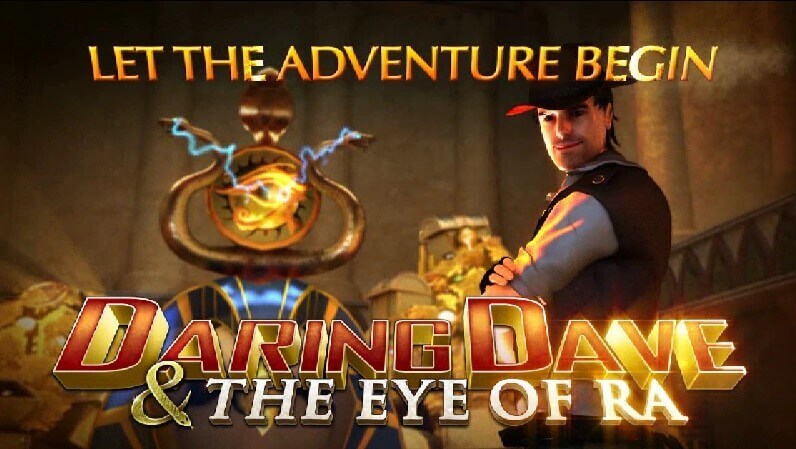 This is another video slot from Playtech game developers and like a couple of other slot games available today is themed toward the style of Ancient Egypt. The reason this theme is popular is that it combines a couple of aspects appropriate to the slot gaming industry as well as displays nicely on the reels. The aspects it brings together are that of adventure and treasure, two hand in hand components of excitement. As far as Daring Dave & the Eye of Ra slot game goes, Playtech have done a good job.

This game features 5 reels to play with, 3 symbols appear on each at any given time and there are 20 pay lines that run across these reels awaiting combinations that ultimately must be formed to win. There are some easy to see settings run alongside the reels, allowing the adjustment of wager as well as other features like auto play and more. But any Egyptian themed slot would be remiss if it left out bonus features and fortunately in Daring Dave & the Eye of Ra Playtech have included a couple. These include a Wild, a Scatter and an interactive bonus game for the lucky players that manage to trigger it.

This may be another Egyptian themed slot game to add to the fairly long list available on the internet or otherwise, but Playtech aren’t a top game developer for no reason, and have done quite well with this slightly different portrayal of a rather common theme choice. The lead character from Daring Dave & the Eye of Ra is a cartoon facsimile of what one can only assume to be Indiana Jones, which does add quite a cool twist to the proceedings. There is also a themed and colourful backdrop to coat the reels in a bit of theme and colour. That being said, the best aspect for livening up the reels is the symbols themselves.

The symbols on the reels of Daring Dave & the Eye of Ra are fairly easy to navigate. The higher paying symbols include 5 types of hieroglyphs, they represent a beetle, a lion, Anubis, Horus and Thoth, with the latter 3 being Egyptian Gods. The lower valued symbols are the playing cards that have become quite commonplace in video slots such as this one.

Ancient Bonuses in this Egyptian Slot

The first bonus symbol to be addressed in this Daring Dave & the Eye of Ra is the Wild and is the lead character himself. Daring Dave can substitute for other game symbols to aid in the forming of winning combinations at online NZ casino sites. The Scatter is the Eye of Ra symbol, resplendent in gold. This symbol doesn’t trigger anything but doesn’t require pay lines to win so which should make it easier to land.

The bonus game of Daring Dave & the Eye of Ra is triggered through the Pyramid bonus symbol. Land one of these symbols on reels 1 and 5 to activate a three part bonus that results in multipliers and coin prizes by spinning wheels and flipping stones in the interactive game.