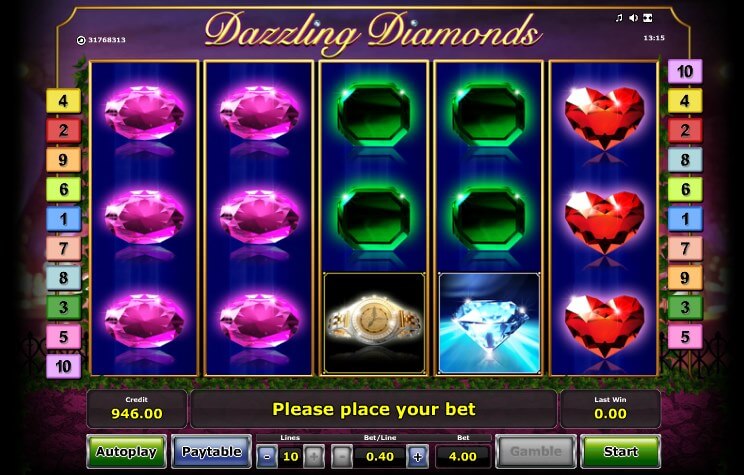 Novomatic are at it again with this particularly shiny Dazzling Diamonds online video slot game. As the name suggests this is a slot themed toward the sparkly and the luxurious, one paying homage to all the glitz and glamour that the worlds’ societies have been convinced to take far too seriously. Still, the appearance of this game, graphics and all, is pleasant, and even with this particular sheen the game doesn’t feel oppressive with the colours involved. The game overall presents well on the reels, speaking of.

The reels found on Dazzling Diamonds online video slot consist of 5 columns and 3 rows, with some 10 pay lines that are fully adjustable. This is a rather standard setup for Novomatic, and in similar fashion there is also a range of betting options for the players to pick from, all laid out around the reels, so the game is pretty broad reaching to most levels of players. A shiny slot like this may suggest a few equivalently glitzy bonus features to live up to the name and theme, unfortunately this is not the case in this slot, instead players will find a few extra features like a Gamble feature and the adjacent pays feature, making the centre of this game the reels, perhaps the way it should be.

The Gemstone Theme in this Dazzling Slot

The diamond is definitely a beautiful thing. Regardless of how it became such an idolised piece of rock, the diamond, and in fact most every gemstone, has been associated with spirituality, wealth and general glamour. The 5 reels of this Dazzling Diamonds online video slot reflect this view of these colourful stones, making the whole atmosphere one of decadence and luxury. Even the sound effects and backdrop convey a sense of dazzle. But in this regard the symbols of the game definitely trump the theme’s portrayal.

On the reels of this Dazzling Diamonds online video slot players will not find the usual playing cards most oft employed by video slot games, and instead substitutes this to make room for all the gemstones used. Amongst the gems found on this already glamorous slot, there are pink and blue ones, red and green ones and more. There are symbols of diamond rings, a bright blue diamond and a pile of cash. Whilst the last one might be a little bit on the nose, these symbols can net some considerable wins, especially so due to the lack of the more obvious bonus features. The blue diamond symbol is the highest pay out offering, with 5 of these winning 500 times the bet placed.

The Additional Features to this Novomatic Slot

The first of these features is the gamble feature, allowing players, on winning spins, to gamble those winnings on the outcome of a hidden playing card. Guess the correct colour of this playing card to double the winnings, fail at this and the winnings are lost. Definitely a gamble, but one that might be worthwhile with NZ slots for real money.

The adjacent pays feature allows for wins to be formed as long as they appear in adjacent reels and comprise 3 or more matching symbols. This means essentially that the combinations can be formed without having to start on the first reel.