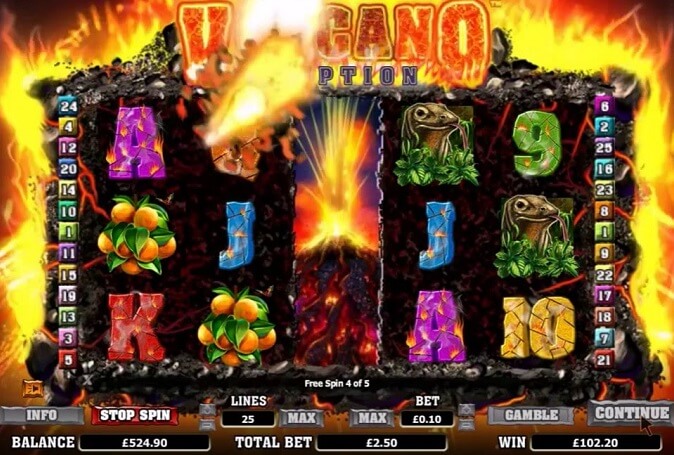 The online slot themes of late have been pretty cutting edge given their start, as rather simple slot classics with just the reels to keep the players company. Recently the capabilities of the platforms used and the developers’ technology have allowed for some rather revolutionary gaming experiences, across multiple different systems like mobile, tablet and more. Looking at the layout, graphics and design of this Volcano Eruption slot game from Nextgen it is clear which end of this scale this slot game is inclined towards.

Otherwise the general theme of this slot revolves around the idea of a Volcano Eruption set in rather prehistoric looking jungle. The number of reels in this slot is 5 and the pay lines that zigzag across these reels can involve up to 25. The betting options are all laid out below the reels in question and in notable Nextgen gaming style these options allow for a broad spectrum of player to find some action at this slot. Despite the appearance of the slot, clearly a large factor of the game, there are a few rather minimal bonus features. These include of course a Volcano Eruption feature and a Gamble option.

Setting up a slot game in and around the idea of a Volcano Eruption that could ultimately trigger at any time adds a rather surreal excitement and expectation on the reels of this Nextgen slot. Whilst this lava mountain contemplates the future of this jungle theme players will discover vivid imagery associated with this game. Not only are there tonnes of colours but the backdrop is captivating, almost detracting from the reels themselves and the sound effects, whilst oft pretty woeful on slot games is rather constructive to the overall theme.

The graphics of this game are pretty good and not only do they affect the more obscure thematic aspects but also the central ones like the symbols found on the 5 reels of this Volcano Eruption slot. The majority of these take the form of playing card symbols, though here they as different coloured rock, cracking under the heat and pressure of being alongside a fiery topped hill. The more themed symbols are more jungle related and include a bushel of oranges, some parrots, a komodo dragon and more. These all make the spinning in this game just that little bit more exciting.

The appearance of this slot definitely took a fair bit of work on the side of the developers and whilst it may make a few players very happy, it’s the bonus features that are really designed to thrill. This is where the bonuses of Volcano Eruption enter the picture and include a bonus game rewarding Wild and a gamble option for the end of the spins.

The Wild is represented by the Volcano Eruption symbol and landing it on the middle three reels will trigger the feature which awards the players with 5 free spins and during these the central reel turns into a massive Wild volcano that not only helps with wins but also spews out some additional Wilds along the way. Though this feature cannot be retriggered it still holds some considerable action and even winning possibility.