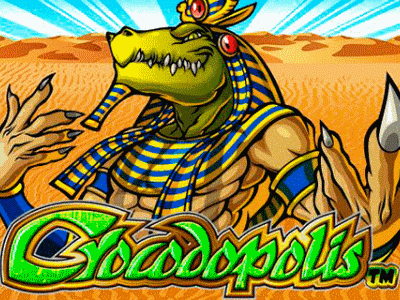 Ancient Egypt has always been a popular theme for slots developers, and Crocodopolis is another game based on the gods and cultures of this legendary land. Crocodopolis is an online slot created by Microgaming, which plays out over 5 reels and 25 adjustable paylines.

Some players may know that crocodiles were culturally very important in Egypt, hence the name of the game. The crocodile god Sobek watched over the Nile river in Ancient Egyptian culture, which provided life and water for most of Egypt’s people. The main bonus features in Crocodopolis are a free spins feature and the Slide a Wild bonus, along with multipliers and more.

The Crocodopolis online slot from Microgaming is set in the heart of ancient Egypt in a sandy desert. The crocodile god is accompanied by camels, scorpions and palm trees, as well as other quintessential symbols of Egypt.

Shimmering sands form the backdrop behind the casino slot’s 5 reels, and bright rays of light can be seen in the distance. A traditional Egyptian soundtrack plays as players spin the reels, and special sound effects are reserved for winning symbol combinations like in many pokies.

The main reel symbols in the slot are ankhs, Egyptian hieroglyphics on papyrus scrolls, colourful scarab beetles, and a variety of Egyptian gods. The Egyptian gods’ symbol is the most valuable symbol on the reels, paying out 5,000 coins for 5 of a kind.

Sobek, the Egyptian crocodile god, appears on the reels of Crocodopolis as the slot’s wild symbol. This wild symbol can replace all other symbols in the game, with the exception of the scatter symbol.

The Crocodopolis scatter symbol is a golden Egyptian pyramid, which activates the free spins feature.

To trigger the Crocodopolis free spins game, players must land 3 or more scatter symbols anywhere during the base game. This will trigger 12 free spins, and all winnings won during the feature will be tripled by a 3x multiplier.

The free spins game can be retriggered from within the round. Free spins winnings can also be wagered in the Gamble feature should players wish to double or quadruple their worth.

The Crocodopolis online slot game also offers the unique Slide a Wild bonus feature. In this feature, the Slide a Wild symbol may appear over any of the 5 reels in the base game. When players land a crocodile god wild symbol on the reel in question, they will be awarded a particular prize.

Reel 1 offers 2x multipliers on any win that contains the wild symbol, and reel 2 offers a 3x multiplier. Reel 3 will award an expanding wild over the entire reel, with all wins then re-evaluated. Reel 4 again offers 3x multipliers for a wild winning combination, and reel 5 will turn all symbols on the reel wild and triple any resulting wins.